Every good tattoo artist will invest in an equally good tattoo stencil machine, but what is it, how do you use it and which are the best ones?

A tattoo stencil machine is a piece of equipment that helps to transfer a pre-made design on a special paper before it is inked onto the body.

Like having a great wireless tattoo machine, having this tool makes a lot of sense. This reduces any room for mistakes, helps to change the design and makes the work neater overall.

As with most things in this fascinating niche, there are various machines to look at.

Each one of them is also broadly classified under two groups – both of which we will consider further below.

We not only introduce some of the best tattoo stencil machines on the market but also what makes them different too.

We have handpicked five (5) of the best tattoo stencil machines on the market today. No matter your needs, these picks will get the job done.

Eclipse got a bit of a bad rap in the market for the V2 model, and that was not unjustified.

This thermal tattoo printer was not bad at what it did – it just didn’t get it done in the best way.

A lot of users complained about the machine overheating, which caused it to trip off or simply get damaged sometimes.

No one wants to have such an unreliable piece of equipment on their hands no matter how good it does its job.

Fortunately, the new V3 version fixes all that.

This tattoo stencil printer is much smaller and lighter than its predecessor.

Users get a new LED adjustment knob and a paper feed sensor for automatic operation.

Addressing more issues from the first model, a quick cooling functionality has been built into this machine.

Though a thermal printer, it is ironically helpful that you don’t have to worry about heat damage anymore. 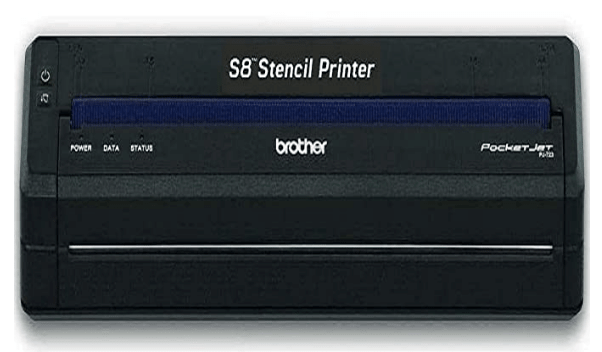 The S8 Stencil Printer ushers in a new wave of printing stencils to make tattoo artists’ work even faster and easier.

Although the machine still uses the traditional thermal stencil paper, it relies on digital feedback to get the images out.

Thus, you can connect your laptop to the printer via USB to generate stunning and beautiful stencils.

This beats having to draw all of your stencils by hand.

If you are a newbie, this machine will help refine your drawing skills to find a place in the market.

With a Li-Ion battery in the mix, you can print stencils on-the-go with the portable unit. 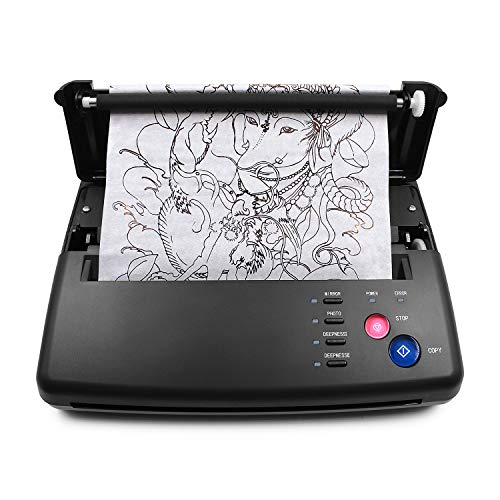 Yet another thermal tattoo stencil printer, this pick from Biomaster is also one of the most affordable that we have come across.

The massive price savings sounds good, but not for any artist who wants to print complex designs, intricate shadows, or generate multiple effects.

For that, you will be better off with other thermal printers on this list.

If you were looking to print simple lines and designs with single effects, though, you are in the right place here.

In case you were wondering, this affordable thermal printer works with both printed and drawn images.

With added functionality for mirror copy images too, get your thermal stencil paper ready for some of the crispest and cleanest transfers on this machine. 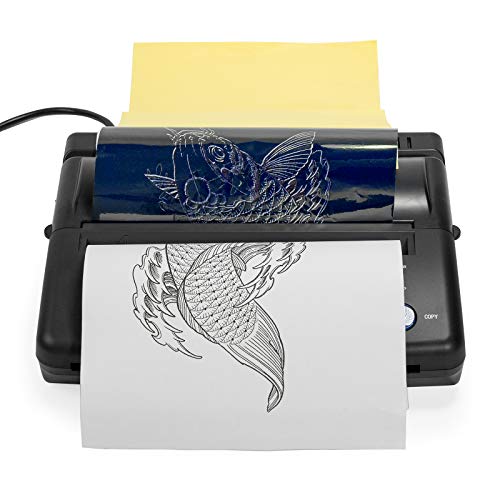 Wormhole also takes the smart route with this printer, allowing connection for printing via Bluetooth.

You don’t always have to go cordless, like the new generation of tattoo machines though.

The brand has also worked on an Android app for smoother mobile connectivity but that solution is a little buggy right now.

We know that it has been returned to the pipeline so we should have that feature in the near future.

The ease of operation, minimal power consumption, and overall viability of this machine for thermal printing make it a top pick any day.

The best thing about the Epson tattoo stencil printer, right out of the box, is that you need neither of the thermal or hectograph stencil paper to make it work.

Feed the machine with regular printer paper and you are good to go.

Epson also fits their machine with an EcoTank. That is just a fancy word for a large tank where you can store ink for extensive printing operations.

That comes in handy when you realize that the machine is capable of printing up to 20 stencil pages per minute.

The top models from Epson can scan and copy as well as print, just like a normal modern-day printer would.

With added functionality for USB and Wi-Fi, you get even more printing options at your fingertips.

Ahhh, but you need something else to have full usability as a tattoo stencil machine.

You will have to buy an Inkjet stencil printer. For now, the most popular one around artists is: 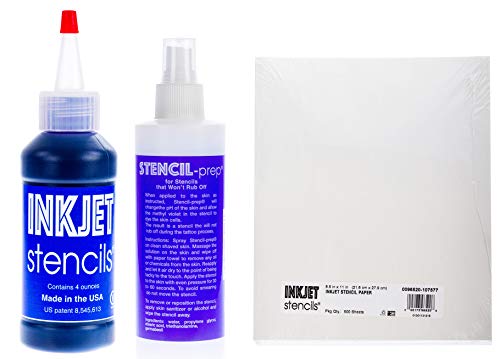 But if your budget doesn’t allow, this could be an alternative: 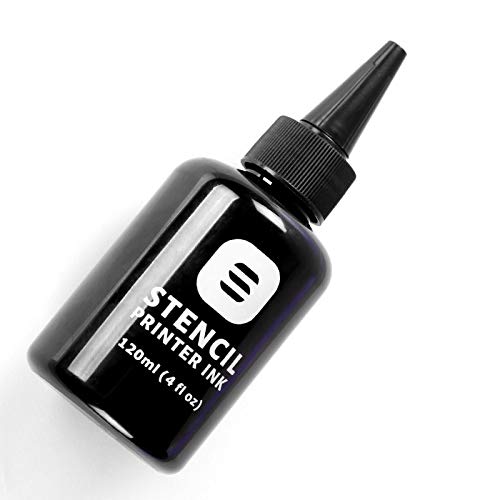 Both inks are suitable for most Epson Ecotank printer models.

All tattoo stencil machines are not the same. They are usually of two (2) broad categories which we have explained below.

Also called thermal printers, these machines (like most of the above ones explained) leverage heat transfer to bring the stencil to life on the thermal paper. 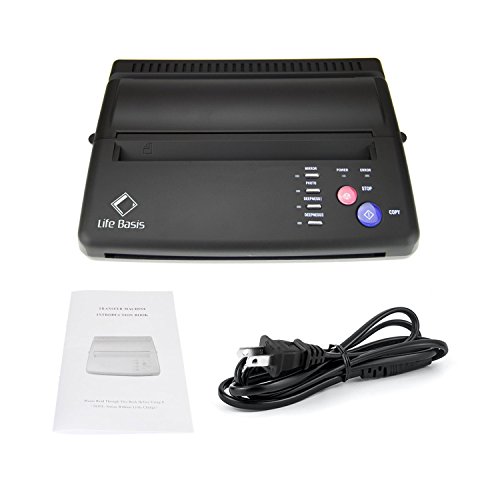 These printers use an old type of carbon paper that is actually no longer in use for general printing.

Formerly native to the printing press, these tattoo stencil papers are now produced mainly for the tattoo industry and other artists with related specialties.

Thermal printers can get hot, but they do a good work of representing the details in the design.

People usually want to know if normal printers can be used to print tattoo stencils as well.

That depends on what you describe as ‘normal.’

These were one of the early printers that tattoo artists used for their craft.

Some of these machines are still around today, and even happen to be the most preferred for some pro artists.

Dot-matrix printers will churn out great stencils with carbon paper.

Some artists prefer them to the thermal printers because of how long they can last on average, and the resolutions you can get on the printout.

When considering temporary tattoos, laser printers can come into the mix.

Some of these can get very detailed in their image result but it should never be considered for any serious work.

When a client is unsure what tattoo they want to get, you can break out the laser printer to create their designs (not stencil).

Like the Epson tattoo stencil printer above, an inkjet model can also be used to generate amazing stencils.

You usually don’t need any special kind of paper on these, so you have some cost savings on that front.

For an inkjet printer to even be considered for stencils, though, there needs to be a special ink tank on board as that is where the ink goes.

Ranging from temporary tattoos to permanent designs, details of the design to the simplicity of drawing, you have all the possible picks you might need up there.

Fortunately, there is no law prohibiting you from picking more than one machine for different needs.

If you were a rookie in the industry, it could be a good alternative to invest in something affordable. Honestly, I think you should try to go for a good model.

The above statement is because these machines are going to last for a long time and why not to start solid? You want a professional tattoo machine but not a stencil with quality?

All in all, from the above explanations, the best tattoo stencil machine for the job will be dependent on what you want to achieve.

Hi!, I'm Thomas, the driver of TMA. Tattoos are a way to express our thoughts, right? but how can we do it without the right tattoo machine? Thanks to my tattoo artist friends, I can transfer their point of view about their experiences in the industry. 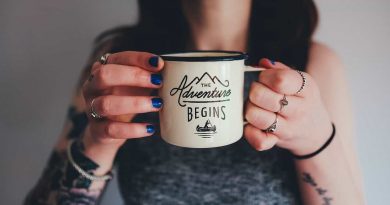 How to Practice Tattooing: Tricks for a Good Start 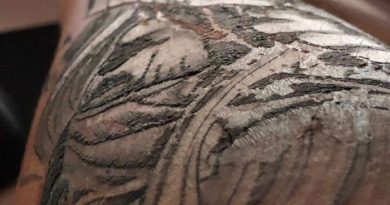 Tattoo Scabbing: How Good or Bad is the Healing Process?

Tattoo Needles Guide 2021: What you Need to Know

How to Practice Tattooing: Tricks for a Good Start